If a team’s form were dictated by the weather, then Claremont should be requesting to play in the rain and wind every week. At the other end of the table, if the scoreboard were the sole indicator of performance and effort meant nothing, South Fremantle would move on quickly from their 44-point loss to the Tigers at Claremont Oval on Sunday afternoon.

As far as wet conditions go, it was a game where the stoppages were aplenty. 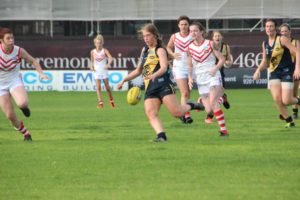 Kicking four goals between them, Katherine Orme and Melanie Baldwin looked dangerously good up forward for the Tigers. A real gamechanger, Orme’s best major arrived when she dodged traffic to nail a tricky goal to get the Claremont faithful up and excited going into half time.

Claremont’s Chloe Colegate worked hard around the ground, creating opportunities and gathering plenty of the ball.

As the game progressed and the weather, albeit drying up, fell below an un-Perth like 20 degrees, temperatures were still running hot at Claremont Oval.

Prompting the arrival of medical staff and a stretcher, Amy Smeding was forced to leave the ground seven-and-a-half minutes into the third term following a strong South Fremantle tackle. Bravely refusing the stretcher, she walked to the bench and was taken into the Claremont rooms by medical staff. 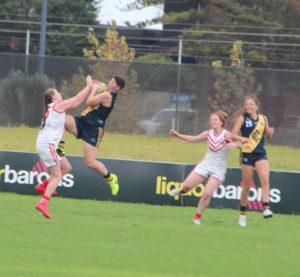 The Bulldogs struggled to find themselves in their attacking half of the ground. Claremont dominated disposals, clearances and marks all afternoon, finding space and still managing to quickly move the ball despite the slippery conditions. Unfortunately, the Bulldogs were unable to match the Tigers dominance on the scoreboard who finished with six goals and 14 behinds.

Going scoreless for the majority of the game, Chae-Lee Salbie broke South Fremantle’s goalkicking drought 11-minutes into the final term.

With four points and their third win of the season in the bag, the Tigers comfortably secured themselves the gritty win. 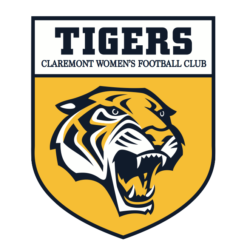 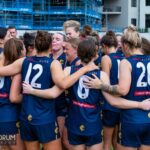 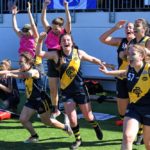 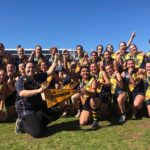