Broome Women’s AFL started unofficially in 2015 with a few volunteers who, while attending local men’s AFL games, were lamenting the lack of opportunities for women to play in the Kimberley region. Frances Finch (a member of the Claremont Women’s Football club) together with Annie Dann (a Broome local and high school footy superstar) started running training sessions with a view to holding an exhibition match as a curtain raiser to one of the men’s fixtured games. They played their first game in 2015 with the support of the West Kimberley Football League, the Cable Beach Football Club and the Saints Football Club.

In 2016, they went on to play 2 more scratch matches and train consistently throughout the year. This was with the support of the WKFL, the Cable Beach Football Club, the Pearlers (Masters) Football Club and tireless volunteers. The other source of support came from the Claremont Women’s Football Club, who donated 2 sets of playing guernseys, including the old Innaloo set!

In 2017, Women’s AFL in the Kimberley has exploded. This is thanks to the supporters previously mentioned, as well as the amazing coverage of the AFLW competition over summer. The Broome women played their first game against Derby on 22 April, while wearing CWFC colours, and WON! The West Kimberley Women’s Football league will commence their first ever 4 team competition on 6 May 2017, with two Broome teams, a team from Looma and a team from Derby. This is hugely exciting for the women of the Kimberley who, until now, had no way to play the game beyond high school.

Congratulations to the players and volunteers at Broome Women’s AFL for reaching this point.

Make sure you head over to their Facebook page to follow the league and get involved if you’re in the area:  https://www.facebook.com/broomewomensfooty/ 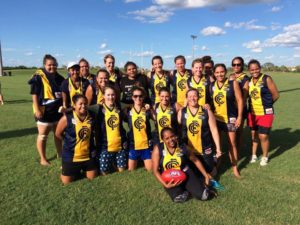